Skip to Main Content
Blog : What the World Doesn’t Know About Cerebral Palsy

What the World Doesn’t Know About Cerebral Palsy 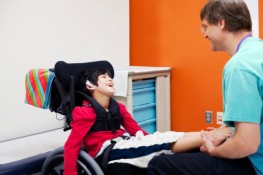 An excerpt from a family’s journey was recently profiled in the New York Times, providing a stunningly real glimpse into their life. “My Brother, Teddy” is a glimpse of a family dealing with cerebral palsy. It recognizes that children affected by the condition have strengths of their own—strengths not always possessed by other children and strengths not always visible to passersby.

“Ice cream, sweet potatoes, the smell of oranges, rain on his face, snow falling…” six year old Emma describes what her three-year-old brother Teddy likes. “Windy days, sprinklers, having our friends over for dinner, getting up early, going over bumps in strollers, rolling around on his mat, trying to stand, holding hands.”

Teddy was born with cerebral palsy. Parents Kelly and Terence O’Brien were told he contracted an infection while in the womb, causing extensive brain damage that will affect him for the rest of his life. The doctor advised them to get used to the new normal.

As is the “new normal” with other families affected by cerebral palsy, each day is seen as a blessing and a challenge, equal parts difficult and inspiring.

Sitting around the dinner table the conversation turns to Emma being Teddy’s favorite person. Emma is too young to grasp the severity of Teddy’s condition. With childhood naivety and optimism, she sees her brother’s future potential as perhaps similar to hers. Though she understands he may need someone to “look after him”, the thought doesn’t occur to her that he won’t one day grow up and have a family of his own.

Children with cerebral palsy can and routinely do inspire others.

Recently, Jesse Stroup, team manager for the Georgia Highlands College basketball team, had a chance to suit up with his teammates in their game against LaGrange College on Senior Day. Not only did Stroup score a couple of three-point shots, using only his good arm, but he received a champion’s congratulations from his teammates and the crowd.

“They’re like my family, like my brothers to me,” said Stroup, who travels with the team, has his own locker, and is accepted by all members alike, providing inspiration to the team at every practice and game.

In Indiana at the Jamfest Super Nationals dance competition, there wasn’t a “dry eye in the house” after two sisters shared their routine. Nine-year old Grace and her 11-year old sister Quincy both used wheelchairs in the routine, but only one needed it.

Grace has cerebral palsy. In the routine, the girls are on either sides of a mirror, where they both begin in a chair. Quincy rises to her feet and dances as the inner spirit of Grace, bounding and spinning. Their mother says the lyrics of the song and the routine itself illustrates how Grace wants the world to see her, how she sees herself.

Here in Washington, a boy with cerebral palsy has not only inspired his mother to start a non-profit for families with disabled children, but to climb a mountain.

Heidi Dawson will climb Mount Rainier to raise money for The Determined Parents Foundation this September. At 14,410 feet, the climb will be a challenge, but as a mother of four she has had more than her share already.

Without the motivation of the World Cerebral Palsy Challenge and her son, Heidi Dawson says she doesn’t think climbing a mountain would have made her bucket list.

Cerebral palsy is much more than a debilitating and painful condition. Children with the condition, whether they suffered a birth injury or infection in-utero, are strength in action, a sign that all things are possible and a reminder that no challenge is too great with the support and love of family and friends.

The attorneys of Morrow Kidman Tinker Macey-Cushman, PLLC represent families of children with cerebral palsy in Seattle and across Washington and are available for a free consultation.