Hospitals Take Steps in Improving Patient Safety, But Plenty More to Be Done 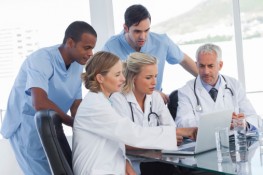 Fifteen years ago an Institute of Medicine Report drew attention to the epidemic of hospital-related harm when it reported that as many as 98,000 patients per year died from preventable medical errors. Last year a new analysis published in the Journal of Patient Safety updated that figure to 440,000 – and prompted a new wave of questions about hospital safety.

U.S. News reported earlier this month that health-care providers are employing a number of approaches to reduce patient harm, and studies from the Department of Health and Human Services, the Centers for Disease Control and Prevention, and others show that progress is being made.

But on the path to zero harm, there are still plenty of obstacles to overcome.

“Are we safer than we were? Absolutely,” Allan Frankel, a senior consultant at Safe & Reliable Healthcare in Concord, Mass., told U.S. News. “Are we where we want to be? Not even close.”

Based on the examples cited by U.S. News, it seems that simply having a system in place to eliminate common errors can make a big difference.

Johns Hopkins anesthesiologist and critical care specialist Peter Pronovost came up with a program to prevent central line infections that focused on simple things such as hand-washing and using sterile drapes. The program was successful in Michigan and is now used nationwide.

Such measures, however, must actually be followed, and that’s a leadership issue.

Rishi Sikka, of Advocate Healthcare in Illinois, told U.S. News, “A lot of folks who look at safety focus on the things we need to do with nurses and physicians. But none of that works on the frontline if culture and leadership aren’t there.”

It’s fair to ask whether eliminating all serious problems is a realistic goal. But as Tim Vogus, a professor of management at Vanderbilt University, pointed out, nuclear power control rooms and aircraft carrier flight decks – two places with high safety risks – experience virtually no errors. With proper measures, couldn’t the same be true for hospitals and other medical facilities?

According to the U.S. News article, Cincinnati Children’s Hospital Medical Center in Ohio gathers key leaders for an 8:35 a.m. “huddle” to discuss the day’s safety issues and solutions, a practice that it adopted from aircraft carriers. And taking a cue from the nuclear industry, Cincinnati Children’s also tries to eliminate problems by thinking about worst-case scenarios. A pharmacist, for example, might anticipate an influx of chemotherapy patients that exhausts medical supplies.

Reducing medical errors to zero, though, requires that all employees do their part.

To reduce so-called “wrong site” surgeries, Advocate has implemented a procedure that requires a one-minute pause before every surgery to ensure that the correct patient and the correct body area are being treated. The practice, says Advocate’s Kate Kovich, encourages anybody at any level to speak up, and apparently nurses have stopped doctors who don’t follow the rule.

In addition to such “hard stops” that prompt providers to double-check the care that’s about to be given, hospitals themselves are being redesigned with error-reduction in mind. Private rooms, for instance, have been shown to reduce the spread of infection, while more family-friendly rooms provide “another set of eyes.”

Patient engagement is also becoming more widespread. At one New York hospital, patients are given a checklist that shows when staff are supposed to wash their hands, and knowing this encourages them to speak up when they don’t observe appropriate hand-washing.

Julia Hallisy, who wrote “The Empowered Patient Hospital Guide for Patients and Families,” says that the sweet spot will be found in the middle of the top-down and the bottom-up approaches.

When the goal is to go from hundreds of thousands of medical mishaps per year to zero, an “all of the above” philosophy indeed appears to be the correct course of action.

The attorneys of Morrow Kidman Tinker Macey-Cushman, PLLC represent patients who have been harmed by preventable medical errors in Seattle and across Washington.