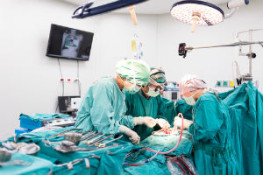 Two newly launched websites could give prospective surgery patients more information about surgeons’ outcomes, helping them reduce the risk of a preventable surgical error during their own procedures, according to a recent Fierce Healthcare article.

At SurgeonRatings.org, patients can search a database of doctors who had better-than-average outcomes in the operating room. The site allows users to search for surgeons within or near their ZIP code, and it also allows users to limit the search results to surgeons who perform one or more of 14 commonly performed procedures, including angioplasties, coronary artery bypasses, hernia procedures, gallbladder removal, hysterectomies, and spine surgeries.

The site, run by Checkbook.org, states that its data come from hospital performance analyses performed by various government agencies, many of which the site claims have not previously been available to the general public.

The second new site, “Surgeon Scorecard,” was recently released by ProPublica, which explained the reasoning behind the site in a recent article. The site’s database calculates death and complication rates for surgeons who perform one of eight elective procedures, including gallbladder removal and hip replacements. Its data are based on Medicare reports, and the site adjusts for factors like patient health prior to surgery, age, and the hospital’s overall quality, according to ProPublica. It does not include patients who were admitted through the emergency room or who were transferred to the hospital from another facility.

Unlike SurgeonRatings.org, Surgeon Scorecard includes doctors whose patients had a higher-than-average rate of complications after surgery. According to ProPublica, the site’s goal was to provide a tool for consumers to compare the performance of surgeons – a tool that has not previously existed.

While the ratings and scorecards are intended to improve safety, patients should still use caution in choosing surgeons and making the decision of whether or not they wish to undergo surgery.

The attorneys of Morrow Kidman Tinker Macey-Cushman, PLLC, are committed to patient safety and represent patients who have been harmed by preventable medical errors during surgeries in Seattle and across Washington. Schedule a free consultation by calling us or contacting us online.