Skip to Main Content
Blog : Should Smartphones Be Banned from Operating Rooms?

Should Smartphones Be Banned from Operating Rooms? 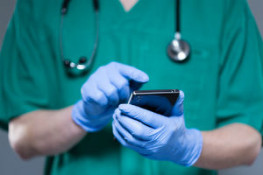 Everyone knows smartphones are one of modern life’s leading distractions. But what if that distraction were in the hands of a surgeon or other members of the medical team in the operating room? An article in The Atlantic explores how cellphones can be both a danger and an important resource as hospitals try to develop policies on the use of the devices.

For example, in 2011, an anesthesiologist in Texas was accused of sending emails and texting while monitoring a patient, who died during surgery. The patient’s family sued, alleging the anesthesiologist did not notice the patient’s oxygen levels had dropped. The legal case was settled before going to trial.

Famously, the physician who was operating on Joan Rivers last year snapped photos during the procedure, according to a federal investigation, the New York Times reports. Rivers’ oxygen supply was cut off during the procedure, eventually leading to her death. Although the investigation does not specifically link the doctor’s cellphone use to the death, it does indicate that the surgical team’s focus may have strayed from patient safety.

“It’s very important that the surgical teams be concentrating on the patient during the surgical event,” Ramona Conner, editor-in-chief of the practice guidelines for the Association of Perioperative Nurses, said in The Atlantic.

The article stated that distracted doctors are not a new concern — stories have been told of doctors reading medical books or newspapers while in the operating room — but the source of the distraction has changed.

Carter and others in the article said bringing cellphones into the operating room is very common, with some saying they see their colleagues checking their phones when they think no one is watching.

“Sometimes it’s just stuff like shopping online or checking Facebook,” Dwight Burney, an orthopedic surgeon from New Mexico, told The Atlantic. “The problem is that it does lead to distraction.” In turn, this can result in medical errors or lax safety procedures, such as forgetting to check a patient’s identity, the article stated.

The Albuquerque, New Mexico, surgical center where Burney works forbids cellphone use in the operating room, but “it is a policy that is routinely violated,” he told The Atlantic. He said that he hasn’t seen cellphone use lead to patient injury at his facility and that lab leaders discipline repeat offenders.

Cardiologist Chandan Devireddy, an associate professor of medicine at Emory University, oversees a catheterization laboratory. He told The Atlantic he enforces a rule that staffers cannot check email or browse the Internet during procedures. His department discusses social media and appropriate use of cellphones at least once a year.

The Atlantic article stated that many medical professionals say smartphones can actualy assist with patient care, giving doctors and nurses the ability to view lab results and other patient information or communicate with colleagues during a procedure.

“We don’t want to throw out the baby with the bathwater,” Conner said in the article. “We want to be able to take advantage of this wonderful technology.”

Devireddy said he agreed. “Our ability to address patient-care issues is much faster. The idea of eliminating mobile phones is, I think, a very restrictive one.” But he also said it is hard to tell if a doctor is looking at patient information or Facebook.

Devireddy and Conner said hospitals need to find a way to balance the benefits of smartphone use with the need to keep staffers from getting distracted.

Hospitals have been looking at the best ways to do that, Paul Anderson told The Atlantic. He is ECRI’s editorial director of patient safety risk and quality, and often lectures on patient safety. Anderson said that it’s most effective to create a culture that discourages inappropriate distractions in general.

The attorneys of Morrow Kidman Tinker Macey-Cushman, PLLC, are committed to patient safety and represent patients who have been harmed by preventable medical errors in Seattle and across Washington, including those caused by distractions in the operating room or other medical settings. Schedule a free consultation by calling us or contacting us online.