Increased Infant Mortality Due to Lack of Prenatal Care 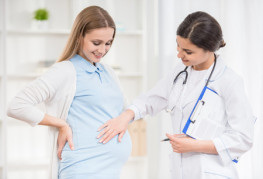 Through the work of advocacy groups in the 1990s, there was a significant decrease in women of all races going without prenatal care. The percentage of births where the mother received late or no prenatal care decreased by more than a third, from six to four percent, between 1989 and 2003. African American, Hispanic and Native American mothers are still more than twice as likely as white mothers to receive either late or no prenatal care.

How does prenatal care decrease the risk of infant mortality?

Prenatal care benefits both the mother and infant. During prenatal visits, physicians can monitor the health of the mother including her risk for hypertension and gestational diabetes and the health of the growing fetus. Additional value comes from the education that a health care provider may provide including:

Increased infant mortality due to lack of prenatal care

Mothers who receive late prenatal care are more likely to have babies with health problems. Mothers who do not receive any prenatal care are three times as likely to give birth to a low-weight baby and their baby has an infant mortality rate five times that of infants whose mother’s received prenatal care beginning before the third trimester. Adequacy of prenatal care – defined by the timing and frequency of care visits – is an important factor in the success of prenatal care. Adequacy has been correlated with positive birth outcomes and other benefits such as reduced risk of postpartum depression and infant injuries.

It should be noted that some health researchers are not comfortable using a lack of prenatal care as a direct cause of increased infant mortality. They point out that women who seek prenatal care are more likely to have higher incomes and intended pregnancies. In addition, prenatal care sometimes fails to address the needs of some women with specific social and medical risks.

A study published in July, 2012 by the US National Library of Medicine National Institutes of Health released data on the increased risk of infant mortality due to lack of prenatal care.

Researchers studied the results of 32,206,417 births over an eight-year period. They found that 11.2 percent of the expectant mothers received late or no prenatal care, skewed toward African American and Hispanic women, those less than 20 years of age and those lacking a high school education. Compared to those who received adequate prenatal care, inadequate prenatal care was associated with increased risk of:

If you lost an infant due to inadequate prenatal care, you may benefit from the help of a medical malpractice attorney. He or she may be able to prove negligence and fight for damages on your behalf.