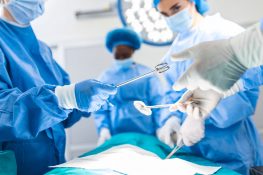 When a surgeon accidentally leaves something inside a patient – such as a sponge, needle, or clamp – it is considered a retained foreign object. While relatively rare, items sewn up inside a surgical site do happen and they can lead to medical malpractice claims when injury occurs. Retained foreign objects can cause serious harm to the patient – the most common issue being pain and suffering. Other damages associated with this serious medical error include hospital readmission or extended stay, additional surgeries, obstructions, intestinal fistulas, abscesses, visceral perforations and in rare cases, even death.

Medical malpractice is a legal cause of action brought by a medical malpractice lawyer against a medical or health care professional who deviated from the standards of care in their profession through a negligent act or omission, and thereby caused injury or death to their patient. If you or a loved one was harmed as a result of a surgeon leaving a foreign object inside your body after surgery, contact a local medical malpractice attorney to discuss your legal rights.

Hospital reporting on objects left behind after surgery varies widely – with some hospitals indicating that they haven’t had a retained object case in years and other hospitals reporting a retained object case after surgery every few months. As a result of this variation, numbers indicate that between one in every 1,000 surgeries and one in every 18,000 surgeries experiences this medical error.

Some of the most common objects left inside patients’ bodies include:

The most frustrating and tragic part of retained foreign object injuries is that they are completely avoidable. They are considered “never events” that could be prevented if hospitals had the appropriate systemic measures in place. While some hospitals have taken steps to implement safety measures, more could be done.

For example, the most common item left behind is a surgical sponge or other type of absorbent pad used to sop up blood during a procedure. Originally, nurses counted the number of sponges before and after surgeries to make sure that they were all accounted for, but that isn’t a foolproof method. For one thing, sponges can get wadded up and soaked in blood, blending in with tissue. For two, some studies have found that surgeons may begin sewing up the surgical cavity before the sponges have been counted for a variety of reasons. Some hospitals use X-rays and bar codes to help detect lost material after a surgery but at least one study has identified radiofrequency detection systems as the best and most cost-effective way to keep track of sponges.

If you have an elective or otherwise pre-planned surgery coming up, it’s a good idea to ask your surgeon and the hospital about their record on retained objects in the last few years. They should also be able to provide a detailed description of the practices they use in the operating room to ensure that this medical error doesn’t happen to you under their care.

The Seattle Personal Injury Lawyers You Want on Your Side

The personal injury attorneys at Tinker Law Firm have been winning birth injury, medical malpractice, and personal injury cases for individuals and their loved ones in Seattle and across Washington State since 1974. We seek justice for injury victims who have been harmed by preventable medical errors, and the negligent or abusive actions of another. Our clients pay no fees or expenses to file a personal injury claim; our firm advances out-of-pocket expenses and is only reimbursed when we recover a settlement on your behalf. Do not delay; personal injury claims in Washington State have a statute of limitations, which means they must be filed within a certain time from the date of the injury.

Call us now at 206-842-1000 or contact us online to schedule a free consultation with one of our skilled and experienced injury attorneys.