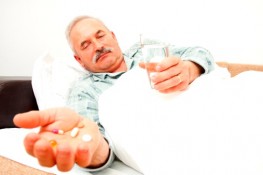 While psychotropic drugs may have a proper role in nursing homes, using them to sedate residents for the convenience of staff is not one of them. Medicare and Medicaid programs prohibit chemical restraint, as does Washington State law.

In addition to facing criminal charges, nursing homes that chemically restrain residents by administering medically unnecessary drugs may be ordered to pay compensation to victims or their families through a civil lawsuit.

If you suspect that a loved one has been chemically restrained in a nursing home or other long-term care facility in Washington State, Otorowski Morrow & Golden, PLLC can help. Our lawyers work to help victims and their families achieve justice through the pursuit of legal actions against those who mistreat vulnerable nursing home residents.

We’ll let you know how victims of negligent chemical restraint can protect their rights under Washington law. Call us today or fill out our online contact form for a free claim evaluation.

The effects of chemical restraint

The use of chemical restraint in nursing homes is widespread, according to resident advocates. The National Consumer Voice for Quality Long-Term Care reports that 26 percent of all nursing home residents and 40 percent of residents with dementia are given antipsychotic medications.

These drugs – frequently given to residents with no diagnosis to warrant their use – place residents at greater risk of injury, harm and death. A Food and Drug Administration (FDA) official estimates that unnecessary antipsychotics kill 15,000 nursing home patients every year.

Psychotropic drugs, such as tranquilizers and sedatives, are often prescribed as a form of therapy to nursing home residents with mental health issues. Antipsychotics, for example, may be administered to dementia patients to prevent them from hurting themselves or somebody else.

Even when prescribed for valid medical reasons, drugs can have harmful side effects, especially when mixed with other drugs. Older patients are more at risk for adverse drug effects, and studies have shown that nursing home residents who take psychotropic drugs regularly on a long-term basis suffer harmful side effects.

These side effects might, on balance, be a worthwhile tradeoff for patients who benefit from psychotropics. But when the drugs are used purely as a restraint, there is no such tradeoff. Or, as Jeffrey M. Levine of the Albert Einstein College of Medicine puts it, “Medication, when used judiciously, can be a valuable adjunct in maximizing function and maintaining well-being in elderly nursing home residents. When used inappropriately, it can be an instrument of harm, abuse, negligence and malpractice.”

What harms may result from chemical restraint of nursing home residents?

Among the risks posed to nursing home residents by over-drugging are:

Over-drugging can even be deadly. There is particular danger when antipsychotic drugs are prescribed to elderly patients with dementia. The FDA in 2005 issued a “black box warning”—the agency’s strongest — indicating that individuals diagnosed with dementia are at an increased risk of death from the use of antipsychotics.

Sudden or unexplained sedation, lethargy, loss of mental faculties, and similar symptoms could indicate that a nursing home resident is being chemically restrained. Suspicion of any type of elder abuse should be reported to the Washington State Department of Social and Health Services (call 1-866-363-4276). You may also consider legal action against the facility.

Share your concerns with a nursing home abuse attorney at Otorowski Morrow & Golden, PLLC by calling or sending us an online message. We’re known, respected, and trusted for our handling of serious injury cases. One of our attorneys is also a nurse who worked in nursing homes before becoming a lawyer.

Your initial case review is free.

Left untreated, appendicitis is a life-threatening health condition. If a patient goes into the... continue reading