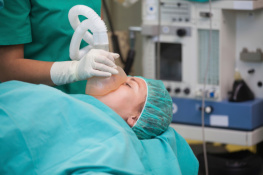 A new study presented at the annual meeting of the American Society of Anesthesiologists (ASA) says that anesthesia complications in the United States have dropped by more than half, while the death rate from anesthesia errors remains steady, according to a press release from the ASA.

The study is titled “An Overview of Adverse Events in the National Anesthesia Clinical Outcomes Registry (NACOR)” and was presented at the ASA’s 2014 annual meeting.

Researchers from the Anesthesia Quality Institute (AQI) in Park Ridge, Ill., analyzed more than 3.2 million anesthesia procedures recorded in the NACOR from 2010-2013 to determine the incidence and nature of anesthesia complications at the national level. They found the rate of complications decreased from 11.8 percent in 2010 to 4.8 percent in 2013, but the overall mortality rate remained unchanged at 0.03 percent, according to the ASA press release.

Medication Errors Are the Most Common Major Complication

“Previous studies examined adverse events for specific surgical procedures, types of anesthesia or patient populations. This is the first time we’ve been able to look at such a large amount of data on a national level,” Dr. Jeana E. Havidich, an associate professor of anesthesiology at Dartmouth-Hitchcock Medical Center in Lebanon, N.H., said in the ASA press release.

Other findings from the study, identified in the ASA press release, include:

“Our findings may be the result of changes in the demographics of practices submitting outcomes information to NACOR over time. It also could be that outcomes improved in the practices that participate in NACOR’s data gathering,” Dutton said.

A better understanding of these processes and the factors associated with anesthesia complications are essential for improving patient safety, say the researchers.

The results – presented on Oct. 12 in New Orleans – have yet to be published in a peer-reviewed journal and should therefore be considered preliminary.

The attorneys at Morrow Kidman Tinker Macey-Cushman, PLLC have represented clients in anesthesia error cases, including injuries resulting from distracted anesthesia providers, errors in administering the right medication, and improper monitoring of patient status during and after surgery. Reviewing these cases requires knowledge of the specialized world of anesthesia. If you have questions about the care you or a loved one has received, contact us for a free consultation.