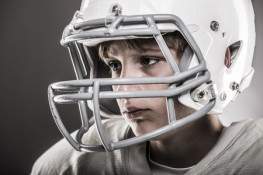 Congressional hearings in 2009 revealed that the NFL had covered up the link between concussion and mental illness (traumatic brain injuries). This was immediately followed by the league’s admission that concussions can lead to “long-term problems.” Recent backlash against youth football from the medical community has also played a role in declining participation. Dr. Robert Cantu -a leading US medical expert on concussion- has recommended that nobody under the age of 14 be involved in collision sports. As a direct result, it seems, fewer parents have been willing to sign their kids up to play football.

According to the Centers for Disease Control and Prevention, traumatic brain injury (TBI) is the leading cause of disability and death in children and adolescents in the U.S. Exact numbers on the number of children who experience brain injuries from Football are hard to quantify as many children do not exhibit signs or symptoms of concussion. An imaging study published in the journal Radiology in October, 2016 shows that tackle football players ages 8 to 13 who have had no concussion symptoms still show changes associated with traumatic brain injury.

Recent research has revealed that children who experience head trauma are at risk for developing more serious injuries than adults. In addition, it can take years for the damage to present itself in children – compared to months for adults. Children with brain injuries often face changes in their abilities to think and learn and to develop socially appropriate behaviors. These negative behaviors are caused by the injured brain’s challenges to process information and impairments to judgment and reasoning skills.

If you or your child has experienced a brain hit or repeated head trauma from youth football that may or may not have resulted in concussion, you may be looking at a long-term traumatic brain injury. Contact a personal injury lawyer today to discuss your rights.