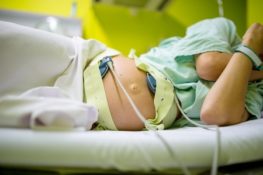 Other states could learn from California; their maternal mortality rate is a third of the American average. Maternal mortality is defined as the death of a mother from pregnancy-related complications while pregnant or within 42 days of giving birth. Hemorrhage and preeclampsia (pregnancy-induced dangerously high blood pressure) are the two most common causes of maternal death. The Centers for Disease Control (CDC) estimates that 60 percent of these deaths are preventable.

It may come as a surprise to Americans that women who give birth in the U.S. have a greater risk of dying in childbirth compared to women in other rich nations. Rather than seeing improving statistics, the U.S. maternal mortality rate is increasing while other countries are making strides in making pregnancy and labor even safer. In fact, maternal mortality in the U.S. increased by 27 percent, from 19 per 100,000 to 24 per 100,000, between 2000 and 2014. During this time the global maternal mortality rate dropped by 44 percent worldwide between 1990 and 2015 and by 48 percent in developed countries. The U.S. was one of only 13 countries – including North Korea and Zimbabwe – that had its maternal death rate increase since 1990.

According to the Organization for Economic Co-operation and Development (OECD) the U.S. maternal mortality rate is more than three times the rate of the United Kingdom and about eight times the rates found in the Netherlands, Norway and Sweden.

Why do women bleed to death during delivery?

Placenta accreta is a condition that causes the placenta to grow out of control and then embeds to the uterine wall instead of being flushed out after birth. Doctors believe that the condition is usually caused by scarring from previous C-sections; this belief seems to be matched by the statistics. In the 1950s when C-sections were rare, the condition developed in only one in 30,000 deliveries in the U.S. Today the condition presents in one in 500 births, which seems to reflect the dramatic rice in C-section deliveries. The issue is that one in 14 American women with placenta accreta die, most often because of hemorrhaging too much blood. A mother can bleed to death in childbirth within five minutes.

What is California doing to decrease the maternal mortality rate?

Even as the maternal mortality rate has been increasing across the U.S., California is bucking the trend. Women giving birth in California have an advantage because of the hemorrhage guidelines created and implemented a decade ago by Dr. David Lagrew as part of Stanford’s California Maternal Quality Care Collaborative (CMQCC). CMQCC is a truly revolutionary initiative to make births safer for moms giving birth in California. As of 2013, there were 7.3 deaths per 100,000 in California, which matches the rates of other developed nations such as the U.K. and a third of the national rate.

Horrified after witnessing a woman die on the operating table from a hemorrhage caused by placenta accreta in 1984, Dr. Lagrew learned about the connection between C-sections and the condition. In 1989 when he was appointed medical director at Saddleback Hospital in Laguna Hills, he began to gather and present data on individual doctor’s C-section rates while educating them about the risks of unnecessary C-sections including complications like placenta accreta. His efforts paid off; C-section rates at Saddleback were reduced by half within five years. In addition to this initial outreach, he created a spot for newborn babies and a red “hemorrhage cart” in case a mother begins to bleed heavily after pregnancy. Adapted from the “code blue cart” used to treat cardiac arrest, the “hemorrhage cart” is filled with tools doctors and nurses need to manage a hemorrhage during or after childbirth. Lagrew has implemented his approach at the eight hospitals where he’s worked since and at hundreds more in the state through CMQCC.

There seems to be evidence that too many American mothers die in childbirth because women’s health is not valued like it should be. About half of U.S. states do not make a formal review of the causes of maternal death on a regular basis which is necessary to identify which deaths are preventable and how reduce or prevent those types of deaths from happening. The U.S. National Center for Health Statistics hasn’t even published an official maternal mortality rate since 2007.