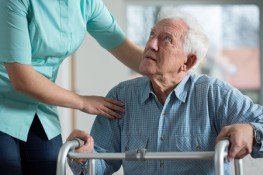 The Trump Administration is attempting to kill a rule finalized in the waning months of the Obama administration that was aimed at helping victims of nursing home abuse by protecting their right to sue in court. Specifically, the rule – released by the Centers for Medicare & Medicaid Services (CMS) in October, 2016 – was written to ban nursing homes and assisted living facilities from forcing patients and their families into private arbitration to resolve any disputes through pre-dispute binding arbitration clauses in nursing home contracts. In private arbitration the dispute is kept out the court system which theoretically weakens a victim’s legal leverage. Note that legal challenges from the nursing home and healthcare industry have kept the law on hold. The rule, originally scheduled to go into effect in November, 2016, would have applied to any nursing care facility that receives money from Medicare or Medicaid, which is almost all of them. With about 1.5 million elderly residents in the nation’s 15,000 Medicare and Medicaid recipient care facilities, the rule could have had a widespread impact.

In June, 2017 the CMS released a proposed rule that would almost completely eliminate the ban on mandatory arbitration clauses in nursing home contracts under the guise of “supporting nursing home residents’ rights to make informed decisions about important components of their health care.” The revised rule only says that binding arbitration must be explained in “plain language” and that patients must acknowledge that they understand the policy. The agency will be accepting public comments on the proposed rule for 60 days from the date it appeared in the Federal Register.

With the understanding that the Obama era rule had language that would have still allowed for nursing homes and nursing home residents to enter into voluntary arbitration agreements, consumer advocate groups publicly criticized the new proposal. The president of Public Citizen, Robert Weissman, stated that the reversal would “…ultimately hurt nursing home residents at a vulnerable time in their life.”

The American Health Care Association – that represents most nursing homes – found in their 2009 study that the average awards after arbitration were 35 percent lower than if the plaintiff had gone to court. Not surprisingly, the association opposed the change to the arbitration rule when the proposal was released in 2015. The AHCA’s senior vice president for government relations defended arbitration in a 2015 interview with NPR, saying “it actually allows consumers to get an expedited award.”

In addition to the changes around the right for a patient to sue, the rule would have also expanded regulations for food, medical treatment and personnel requirements for long-term care facilities. If your loved one may have been the victim of nursing home abuse, contact a caring, experienced nursing home abuse lawyer to discuss their legal rights.