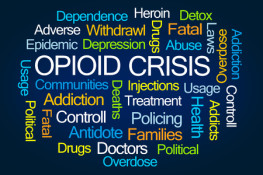 With the shocking rise in opioid addiction and overdose deaths in the last decade, physicians are under increasing scrutiny to avoid overprescribing pain medication and patients are sometimes running into resistance when seeking pain medication for chronic pain mangement. In 2016 the Centers for Disease Control and Prevention released new provider guidelines for prescribing opioids with the goal of improving patient safety and reducing associated risks.

A 2010 analysis of closed medical malpractice claims found that 82 percent of cases involved physicians who inappropriately managed prescriptions or patients who did not follow their care instructions, or both.

Adding to this finding, researchers at the University of California, San Francisco, and Brigham and Women’s Hospital in Boston, Massachusetts, examined more than 350,000 closed cases involving chronic pain management from a U.S. malpractice carrier between 2009 and 2013. The researchers found that improper medication management was the “alleged damaging event” in 65 percent of all the cases, and that it was the determining factor in all cases involving death.

The diagnoses that were most involved in medical malpractice claims for improper chronic pain management were degenerative joint disease of the spine at 56.8 percent of claims, followed far behind by failed back surgery syndrome at 16.2 percent of claims. Patients with multiple pain sites were identified in 21.6 percent of claims.

What damages may be recovered from improper chronic pain management medical malpractice cases?

In medical malpractice cases the injured party generally recovers damages for pain and suffering, emotional trauma, lost wages, medical expenses and ongoing care. The actual amount of the settlement varies widely depending on the severity of the injuries and other factors. An experienced medical malpractice lawyer assesses each case to determine a fair settlement.

In order to have a viable medical malpractice claim for addiction, the patient must show that the prescribing doctor failed to meet the duty of care owed to their patient by providing negligent care. Negligent care may include:
• Failing to offer any other treatment options and/or
• Failing to warn about potential short-term and long-term side effects.

The patient must also show that they fully cooperated in following the physician’s instructions and that they were not aware of possible long-term side effects.

In addition, the injured party must show that they were injured (addiction) as a result of the negligent care and that the injuries caused monetary damages such as lost wages and medical bills.

The Seattle personal injury attorneys at Morrow Kidman Tinker Macey-Cushman, PLLC have years of experience representing families harmed by medical malpractice and other types of negligence. We seek justice for patients who have been harmed by preventable accidents and medical errors including birth injuries, hospital-acquired infections, diagnostic errors, prescription drug injuries and wrongful death in Seattle and across Washington State. There are no fees or expenses to file a personal injury case as we only receive payment if we recover damages on your behalf. Do not delay; personal injury claims come with a Statute of Limitations, which means they must be filed within a certain time frame of the injury.

Call us now at (206) 752-4366 or contact us online to schedule a free consultation with one of our compassionate, experienced attorneys.